Your Brain on sugar – Part 1: Why You Crave Sugar 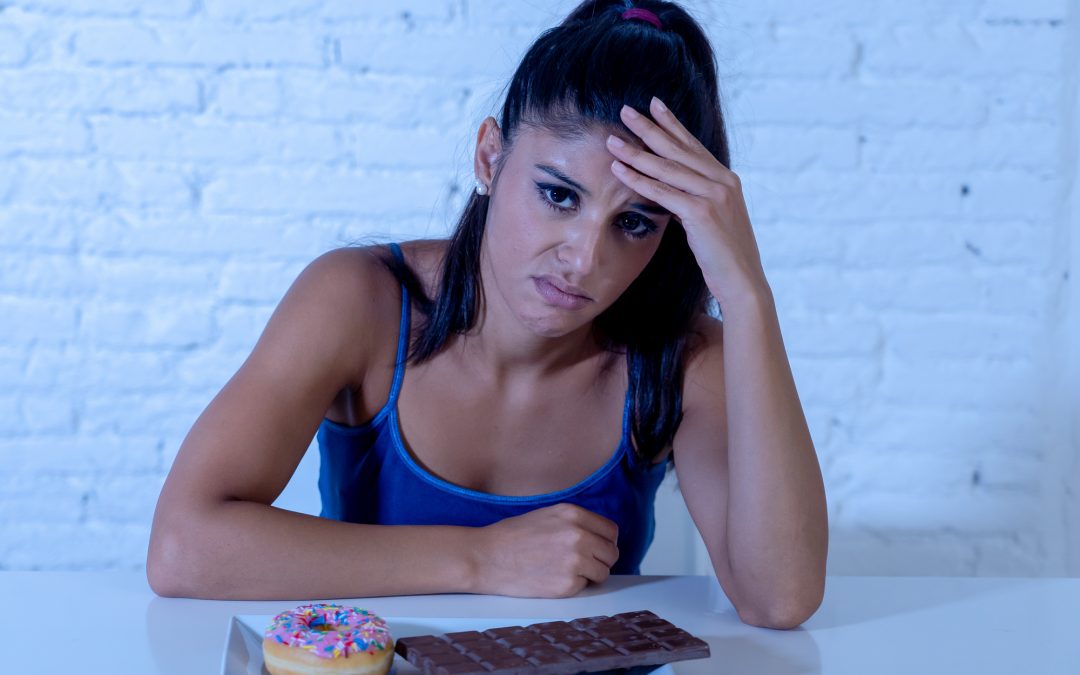 Are you hooked on sugar? Do you need pastries and donuts to get through the day? Do you crave sweets and can’t do without desserts? Do you reach for sugar when you are stressed?

Or, if you are a practitioner, do you wonder why it is harder to get your clients with a sweet tooth to follow through with your programs? They might even know sugar is bad for them, but they eat it anyway!

Sugar hijacks our brain so that it is highly addictive and most people who struggle with blood sugar issues are sugar addicts1. Even rats prefer the sweet taste over cocaine, including rats that are already addicted to cocaine2. Sugar addiction is not your fault because sugar is everywhere, along with the misinformation that high-sugar processed foods are good for you.

Why is sugar addictive?

Our physiology evolved to survive as hunter-gatherers, where sweet foods were few and far between. Wild fruits or tubers were less sweet than what you get in the supermarkets nowadays, and they were not easy to come by. Also, when food was not guaranteed, the more energy you have stored, the more likely you were to survive in times of famine. Because sugar is easily stored as glycogen and fat, your body treats it as a highly sought after fuel.

The human brain deals with sugar as it would anything else that helps us survive better—by releasing the neurotransmitters that make you feel good. Your brain on a sugar rush is high on dopamine that rewards you, serotonin that comforts and calms you, and opioids that make you happy and relieve your pain1.

However, the effects are short-lived, and soon enough you will experience a crash in blood sugar and neurotransmitters, causing you to reach out to more sugar again.

Sugar checks all the boxes as an addictive substance1, including:

Dopamine is the “reward neurotransmitter” that rewards you for things that make you more likely to survive. You get a pleasurable hit of dopamine when you get messages from your loved ones or when your Amazon order arrives. Dopamine is why sex, sunshine, shopping, and eating makes you feel good, so you keep doing these things. Cocaine is also a drug that increases dopamine.

The catch with sugar: dopamine resistance

The problem arises when sugar, along with the modern lifestyle, constantly floods the reward region of our brain with dopamine. Social media and other modern-day instant gratifications also increase dopamine and can be addictive7. Just as your cells can be insulin resistant from having too much insulin for too long, the reward region of your brain can also become dopamine resistant. Neurons in the reward regions of the brains of addicts, including sugar addicts, and obese people have a smaller number of dopamine receptors on their surfaces, so they need more dopamine stimulants in order to feel the reward8.

The constant dopamine rollercoasters and resistance can make sugar addictions worse, and is definitely unhealthy for the brain. One of the keys to successfully beating sugar addiction is to reverse dopamine resistance. It’s true that you need to quit sugar, but it is also important to address the other lifestyle factors that are flooding your brain with dopamine.

Serotonin is dubbed “the mood neurotransmitter.” If your serotonin and their receptors are not working well, you will have a bad mood, depression, and anxiety. Many antidepressants increase serotonin.

Low serotonin function can cause carbohydrate craving. Conversely, supporting serotonin function, such as with 5-HTP supplements, reduces sugar cravings and often results in weight loss11. Because estrogen increases serotonin and serotonin receptors in the brain, many women crave sugar when their estrogen levels are lower, such as late in their cycle and during menopause12. Therefore, addressing hormones is a key piece of fixing sugar addiction and insulin resistance.

Opiates are substances that produce pain-relieving and euphoric effects, such as endorphins. Natural opiate release in response to eating is a major driver of binge eating and obesity. The sweet taste, including from artificial sweeteners, potently stimulates the release of natural opiates in the brain. The opiate-releasing effects of sugar are one of the reasons sugar is a highly addictive substance that many people use to self-sooth in times of stress13. Over time, the opioid receptors become less sensitive to opioids, so more opioid stimulants are needed to elicit the same level of pleasure14.

Many people repeatedly try to eat healthily and fail mainly because they only think about the food and fail to address what is happening in their brain. Our brain rewards us to eat sugar, especially when we are surrounded by modern-day stress, hormonal assaults, and other sources of instant gratification. In addition, because sugar can throw off the neurotransmitters, it contributes to mental health problems, brain fog, and age-related cognitive decline.

If your goal is to beat the sugar addiction and balance your blood sugar, it is important to work with—not against—your neurobiology for long-term success. In the next article, I will share how I help my Sweet Spot Solution program clients through this process.

If you are trying to get off sugar quickly, try out some of my free, Hormone Hacking Breakfast Recipes that will start your day off with steady blood sugar and balance your hormones so you can stop storing fat.